) which is a Taluk is in Uttara Kannada district of Karnataka state. It is a place of rich antiquity, beaches and old temples. Ankola is also known as the Bardoli of Karnataka, for the role it played in the freedom movement. It is a small town on the west coast of India. Ankola is famous for its native breed of mango called ishaad and for cashew harvesting. It is also known for treatment of Paralysis. Belambar is a small village 7 kms. from Ankola, where Mahatma Gandhi was treated for paralysis. Even today the place is on record.

On 23rd February 1930, a meeting of the Karnataka Provincial Congress Committee presided by R.R.Diwakar was held at Bellary and a Sathyagraha Committee was formed. The Congress leaders of Karnataka undertook tours to explain to the people the objectives and methods of the Congress.

These leaders submitted the report of their work to the Provincial Congress Committee, which met in Dharwad on 16th March 1930. These leaders opined that North Kanara district was the suitable place for launching the civil disobedience movement in Karnataka and the villages and the towns on the coast were suited for the Salt Sathyagraha. Karnataka decided to start the Salt Sathyagraha on 13th April the day on which the infamous Jallianwallabagh massacre had taken place and Ankola was fixed as the place of venue wherein volunteers from all parts of the state were to participate. Earlier in Belguam when Gandhiji broke the Salt laws on 6th, Gangadharrao Deshpande auctioned contraband salt and Narayanarao Joshi, Jeevanarao Yalagi and Anantha Dabade bought it. All these four were arrested the next day and hartals, protests and processions followed their arrest in many parts of Karnataka. On 13th April, in the presence of about 40,000 people M. P. Nadakarni broke the salt law in Ankola. Revu Honnappa Naik bought the first packet of salt auctioned for 30 rupees. After the auction Swami Vidyananda addressed the gathering in which leaders like, Karnad Sadashiva Rao, Smt Umabai Kundapur, Dr Hardikar, T.S.Naik and others participated.

The police promptly arrested the leaders but the Sathyagraha continued for 45 days with full tempo. Salt Sathyagraha was offered in nearly 30 centres like Mangalore, Kundapur, Udupi, Puttur, Padubidre, etc in Karnataka. Students came out in large numbers to prepare salt and sell it from house to house. When Gandhiji decided to raid the salt depot at Dharsana, a similar raid was undertaken in Canara at Sanikatte. A group of volunteers led by Sridhar Panduranga Balaji collected a few mounds of salt and carried it to Kumta, where the whole stock was sold in 15 minutes.

Forest Sathyagraha and agitation against the production and sale of liquors followed the Salt Sathyagraha. People broke the regulation regarding reserved forests and bought firewood or fodder and courted arrest. Picketing of liquor shops, cutting down of toddy trees and picketing the auction of toddy depots were also resorted too. It was common to see the picketers being beaten by police and also by those who were prevented from drinking. In the boycott of foreign cloth, women took a prominent part and went from house to house to gather foreign cloth and held bonfires in every village and at the same time spread the message of Charka. Four taluks in Karnataka namely Hirekerur in Dharwad district and Ankola, Sirsi and Siddapura in North Kanara district were selected for organizing the no-tax campaign. Despite repressive measures by the authorities, the campaign was a huge success. More than 1500 activists were arrested in Karnataka for participating in the Civil- Disobedience Movement during 1930-31.

The arrest of Gandhiji and other Congress leaders saw the resumption of the no-tax campaign in North Kanara district of Karnataka. The people of Ankola and Siddapura not only refused to pay the land tax but also allowed their movable and immovable properties to be seized. When auctioned the goods had no bidders and even if some ‘loyalists’ did buy such goods, women volunteers launched hunger strike in front of their houses. These women volunteers had to face ridicule and abuses and hooligans along with police committing atrocities of the worst kind on them. But these women persisted in their strike and broke fast only when the buyers returned the auctioned goods to their original owners. As all grown-ups in many families had been arrested for non-payment of land revenue, their houses were locked and their children had to take refuge in Balakashramas or shelter homes for children. When released from jail many activists found their houses in a dilapidated condition either due to police excess (the police had dug up inside houses in the hope of obtaining valuables buried) or due to weather conditions. Thus the sacrifice of the people of Ankola and Siddapura in the no-tax campaign was immense. In February 1934, Gandhiji toured places like Sirsi, Siddapura, Ankola and Karwar. To the people of these taluks, who had undergone unbearable suffering and offered their as sacrifice in answer to his call of civil disobedience, the physical presence of Gandhiji was the cause of supreme joy and unbounded enthusiasm. In the meanwhile Gandhiji began to undertake the antiuntouchability campaign in a serious way and hence on 7th April 1934, he announced the final suspension of the Civil Disobedience Movement.

“The brave peasants of Karnataka have vied with you in their sacrifice, in their loss of lands and property, in their privations and their suffering. They have courted attachments, confiscations, imprisonments and worse. Both men and women have shown utter disregard to sufferings and privations and they are today as ruined and resourceless as can be imagined. The tales of their bravery and their sacrifices have filled me with admiration and pride and the news of their sufferings at times unhinged me.” said Sardar Vallabhai Patel to his own peasant co-workers of Bardoli who had made history by their No-Tax Campaign in 1928.

An annual mela called 'Bandihabba' is celebrated on Buddha Poornima in the month of May. This is an important festival celebrated over a period of nine days. On the ninth day, the mela is conducted near Shantadurga temple and people from around the town and village throng to the temple in joyous celebration.

Another big festival called 'Karthik' is celebrated during November when five temple deities will be out of Ankola town on Palakki for a night stay and will return next morning. The entire town celebrates this town with fireworks.

Places worth visiting in Ankola 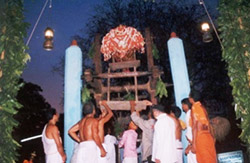 Sri Shanta Durga is the ‘Grama Devate’ of Ankola. People of Ankola origin based all over the world throng to witness the famous ‘Bandihabba’ festival held during the summer month of May. 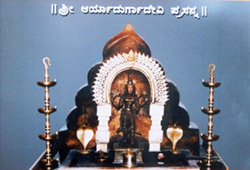 Originally located on Anjadip Island near Karwar, the temple of Sri Arya Durge was destroyed by the Portuguese. Devotees had no other option other than to shift the diety to a neighbouring place which was Ankola. 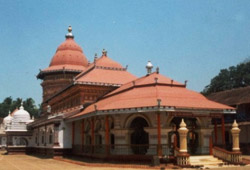 The Goud Saraswat Brahmins who fled from Goa around 1510 A.D. with their family deities (Kuladevatha idols) migrated to Ankola and settled here. The idol of gold in this temple is taken out for worship once in ten-fifteen years. 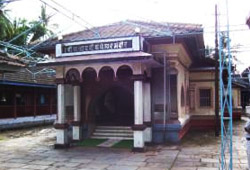 About 8 kms north of Ankola towards Karwar, Aversa has the famous Katyayani Temple. The distinct feature of this temple is that the shrine is in the shape of a ship. It is the family Godess of Kharvis, a fishermen clan. The image of the Godess is said to have been found in the sea. The Godess is worshipped with great solemnity during the nine nights of ‘Navarathri’ which precede ‘Dussera’ in October. 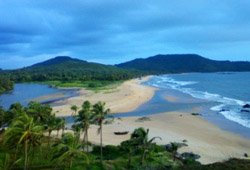 Located 2 kms from Ankola town, this pristine beach attracts local folk and outstationers alike. A view from an adjacent mountain shows the confluence of the local river with the Arabian Sea. Shedikuli beach, located nearby is also worth a visit. 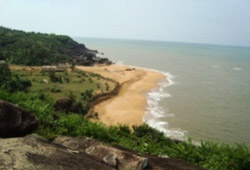 Honnebail Beach (7 km. from Ankola), also known as Honey Beach, has recently been developed by some private entrepreneurs. Two resorts on the beach cater to domestic and international tourists. 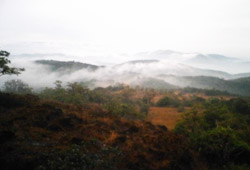 Vibhuti waterfall is near Kuntgani, 70 km. from Ankola. A short trek of 4 km. from Kuntagani brings you to this largely unexplored waterfall which lies undisturbed for the better part of the year. A further trek takes you to Moti Gudda (Pearl Mountain) where one can be literally above the clouds.